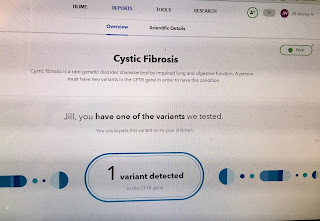 My husband, Jim, and I just took one of the common, mail-in, genealogy DNA tests to learn more about our family backgrounds. In addition to learning I’m 25% Italian and 0.5% Native American, I learned I am a carrier of Cystic Fibrosis (CF). I always knew this was a possibility, but I had never been tested for the Cystic Fibrosis trait. Even when Jim and I decided to have a child almost 30 years ago, neither of us got tested. Why not? There is no reason. We just didn’t. I guess we knew the risk was higher than normal since my older brother, Roger, died from CF when I was a baby. Yet, still, we did not test ourselves.
When I think about things now, we were playing Russian Roulette! We knew that both parents had to carry the gene, just like my parents did. This meant the chances of me having it were even greater than the average person. We knew no one in Jim’s family had CF (at least that we knew of), so I guess we thought his chances were slim of carrying the gene. Still, why? Roger was born with CF and started showing his symptoms at 6 months. Symptoms progressively got worse and he died from CF complications at the age of 4. In the late 50s and early 60s, very little was known about CF and most children never reached the age of 10.

I was 4 months when Roger died and sadly don't remember him at all. All I have are photos and stories my parents have told me. Thus one of the reasons I scrapbook; to keep memories of Roger alive!

I guess it all came down to the fact that we wanted children and would knowing one way or the other if we were both carriers make us decide to not have a family?  Simply, no. Every pregnancy has it’s risks, whether it’s a miscarriage, Down’s syndrome, etc. When it comes to having a child, sometimes the love involved far outweighs the risks. Ask any parent who has had a child with CF, or any other genetic risk-related condition, and they will most likely tell you the same thing. Love is what is important…love is what gets you through the adversities.

---contributed by Jill Worley
Posted by Unknown at 6:09 PM 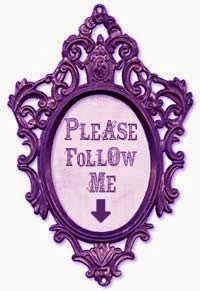